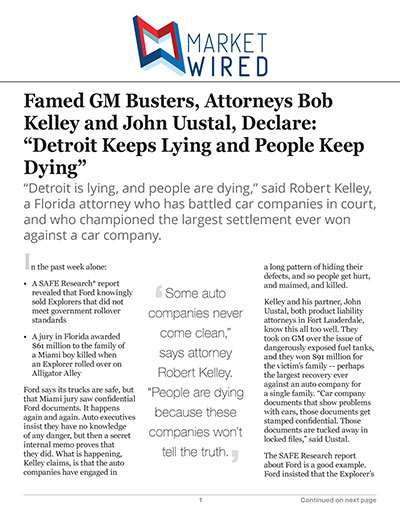 “Detroit is lying, and people are dying,” said Robert Kelley, a Florida attorney who has battled car companies in court, and who championed the largest settlement ever won against a car company.

In the past week alone:

Ford says its trucks are safe, but that Miami jury saw confidential Ford documents. It happens again and again. Auto executives insist they have no knowledge of any danger, but then a secret internal memo proves that they did. What is happening, Kelley claims, is that the auto companies have engaged in a long pattern of hiding their defects, and so people get hurt, and maimed, and killed.

Kelley and his partner, John Uustal, both product liability attorneys in Fort Lauderdale, know this all too well. They took on GM over the issue of dangerously exposed fuel tanks, and they won $91 million for the victim’s family — perhaps the largest recovery ever against an auto company for a single family. “Car company documents that show problems with cars, those documents get stamped confidential. Those documents are tucked away in locked files,” said Uustal.

The SAFE Research report about Ford is a good example. Ford insisted that the Explorer’s roof was strong enough to meet federal standards. But then researchers found that unreleased internal Ford documents showed that the trucks failed to meet the standard. Since then, many Explorer passengers have been killed or injured. The fatal rollover leading to the Miami verdict occurred in 1997, and in March, another jury awarded over ten million dollars in the case of a fatal Explorer rollover in Jacksonville, Florida.

This report served as a painful reminder to Kelley and Uustal of their case against General Motors. Through years of courtroom battles, and after their Judge threatened GM with contempt, they forced GM to hand over secret internal memos. Those smoking gun documents showed that the company knew of the potential for catastrophic fires, but decided not utilize proposed countermeasures. Those documents led to the $91 million recovery in their case against GM, after the death of a young boy in a horrible car fire.

“The reason that manufacturers lose in court is because any jury can see that they are lying to their customers,” Kelley said, “And the juries want to send them a message — Make your cars safer!”