PTSD sufferers among those planning to sue sheriff, school board over Parkland shooting 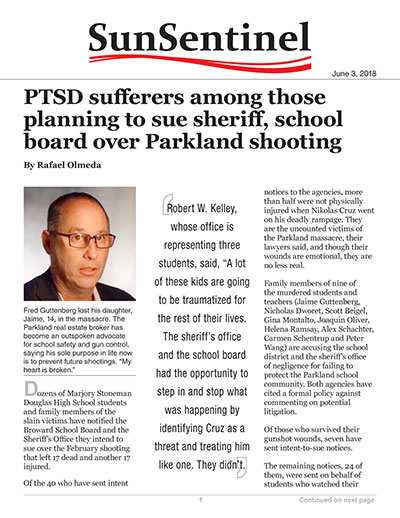 Dozens of Marjory Stoneman Douglas High School students and family members of the slain victims have notified the Broward School Board and the Sheriff’s Office they intend to sue over the February shooting that left 17 dead and another 17 injured.

Of the 40 who have sent intent notices to the agencies, more than half were not physically injured when Nikolas Cruz went on his deadly rampage. They are the uncounted victims of the Parkland massacre, their lawyers said, and though their wounds are emotional, they are no less real.

Family members of nine of the murdered students and teachers (Jaime Guttenberg, Nicholas Dworet, Scott Beigel, Gina Montalto, Joaquin Oliver, Helena Ramsay, Alex Schachter, Carmen Schentrup and Peter Wang) are accusing the school district and the sheriff’s office of negligence for failing to protect the Parkland school community. Both agencies have cited a formal policy against commenting on potential litigation.

Of those who survived their gunshot wounds, seven have sent intent-to-sue notices.

The remaining notices, 24 of them, were sent on behalf of students who watched their friends die, who heard the gunshots, barricaded themselves in classrooms and wondered if they would ever see home again.

The Sun-Sentinel is not naming the students who are reporting that they now suffer from Post Traumatic Stress Disorder and other psychological and emotional problems since the shooting.

One female student “went into hiding in a closet inside of a classroom,” according to the notice her lawyer, Alex Arreaza, sent to the school district. She “saw the shooter, Nikolas Cruz, go into that classroom and shoot several students, killing two of [her] friends.”

Another student tried in vain to save her friends, according to the letter sent by her lawyer, Courtney S. Clyne.

Her “friend was murdered before her eyes. [She] used her jacket as a tourniquet in order to slow the bleeding of another friend who was shot right next to her. The extent of the mental and emotional damage this has caused… cannot yet be determined.”

“The damage that was caused was not to 34 kids,” said Arreaza. “It was to hundreds of them.”

Arreaza is representing four students, three of whom were not physically injured, said the students of Stoneman Douglas suffered a trauma comparable to combat veterans.

Robert W. Kelley, whose office is representing three students, including one physically injured, said nightmares will follow any student who heard the shots, saw the results, or raced for their lives through the blood stained hallways to safety.

“A lot of these kids are going to be traumatized for the rest of their lives,” he said. “The sheriff’s office and the school board had the opportunity to step in and stop what was happening by identifying Cruz as a threat and treating him like one. They didn’t.”

Under state law, public entities are entitled to six months’ notice before a lawsuit is filed.

In late April, the insurance company representing the school board indicated an intention to treat the shooting as a single incident, capping liability at $300,000. The law does allow victims to ask the state legislature to approve additional compensation through a “claims bill.”