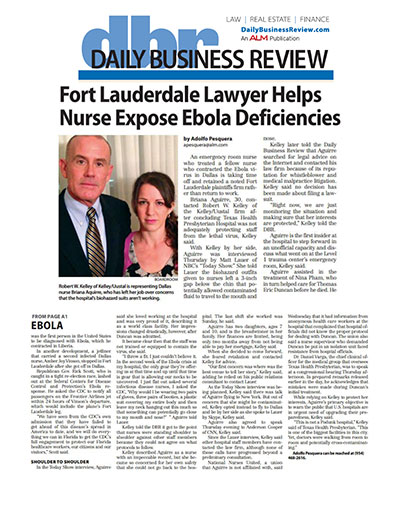 An emergency room nurse who treated a fellow nurse who contracted the Ebola virus in Dallas is taking time off and retained a noted Fort Lauderdale plaintiffs firm rather than return to work.

With Kelley by her side, Aguirre was interviewed Thursday by Matt Lauer of NBC’s “Today Show.” She told Lauer the biohazard outfits given to nurses left a 3-inch gap below the chin that potentially allowed contaminated fluid to travel to the mouth and nose.

Kelley later told the Daily Business Review that Aguirre searched for legal advice on the Internet and contacted his law firm because of its reputation for whistleblower and medical malpractice litigation. Kelley said no decision has been made about filing a lawsuit.

“Right now, we are just monitoring the situation and making sure that her interests are protected,” Kelley told the DBR.

Aguirre is the first insider at the hospital to step forward in an unofficial capacity and discuss what went on at the Level 1 trauma center’s emergency room, Kelley said.

Aguirre assisted in the treatment of Nina Pham, who in turn helped care for Thomas Eric Duncan before he died. He was the first person in the United States to be diagnosed with Ebola, which he contracted in Liberia.

In another development, a jetliner that carried a second infected Dallas nurse, Amber JoyVinson, stopped in Fort Lauderdale after she got off in Dallas.

Republican Gov. Rick Scott who is caught in a tight re-election race, lashed out at the federal Centers for Disease Control and Protection’s Ebola response. He asked the CDC to notify all passengers on the Frontier Airlines jet within 24 hours of Vinson’s departure, which would include the plane’s Fort Lauderdale leg.

“We have seen from the CDC’s own admission that they have failed to get ahead of this disease’s spread in America to date, and we will do everything we can in Florida to get the CDC’s full engagement to protect our Florida healthcare workers, our citizens and our visitors,” Scott said.

In the Today Show interview, Aguirre said she loved working at the hospital and was very proud of it, describing it as a world class facility. Her impressions changed drastically, however, after Duncan was admitted.

It became clear then that the staff was not trained or equipped to contain the virus, she said.

“I threw a fit. I just couldn’t believe it. In the second week of the Ebola crisis at my hospital, the only gear they’re offering us at that time and up until that time is gear that is allowing our necks to be uncovered. I just flat out asked several infectious disease nurses, I asked the CDC, ‘Why would I be wearing two pairs of gloves, three pairs of booties, a plastic suit covering my entire body and then leave my neck hanging out this much so that something can potentially go close to my mouth and nose?'” Aguirre told Lauer.

Kelley told the DBR it got to the point that nurses were standing shoulder to shoulder against other staff members because they could not agree on what protocols to follow.

Kelley described Aguirre as a nurse with an impeccable record, but she became so concerned for her own safety that she could not go back to the hospital. The last shift she worked was Sunday, he said.

Aguirre has two daughters, ages 7 and 10, and is the breadwinner in her family. Her finances are limited, being only two months away from not being able to pay her mortgage, Kelley said.

When she decided to come forward, she feared retaliation and contacted Kelley for advice.

“Our first concern was where was the best venue to tell her story,” Kelley said, adding he relied on his public relations consultant to contact Lauer.

As the Today Show interview was being planned. Kelley said there was talk of Aguirre flying to New York. But out of concern that she might be contaminated, Kelley opted instead to fly to Dallas and be by her side as she spoke to Lauer by Skype, Kelley said.

Since the Lauer interview, Kelley said other hospital staff members have contacted the law firm, although none of those calls have progressed beyond a preliminary consultation.

National Nurses United, a union that Aguirre is not affiliated with, said Wednesday that it had information from anonymous health care workers at the hospital that complained that hospital officials did not know the proper protocol for dealing with Duncan. The union also said a nurse supervisor who demanded Duncan be put in an isolation unit faced resistance from hospital officials.

Dr. Daniel Varga, the chief clinical officer for the medical group that oversees Texas Health Presbyterian, was to speak at a congressional hearing Thursday afternoon. In prepared remarks released earlier in the day, he acknowledges that mistakes were made during Duncan’s initial treatment.

While relying on Kelley to protect her interests, Aguirre’s primary objective is to warn the public that U.S. hospitals are in urgent need of upgrading their preparedness. Kelley said.

“This is not a Podunk hospital,” Kelley said of Texas Health Presbyterian. “This is one of the biggest facilities in this city. Yet, doctors were walking from room to room and potentially cross-contaminating.”