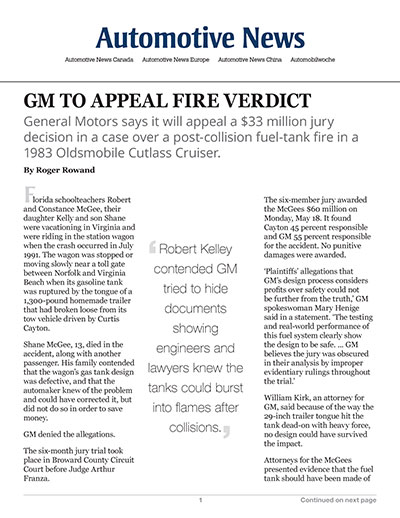 General Motors says it will appeal a $33 million jury decision in a case over a post-collision fuel-tank fire in a 1983 Oldsmobile Cutlass Cruiser.

Florida schoolteachers Robert and Constance McGee, their daughter Kelly and son Shane were vacationing in Virginia and were riding in the station wagon when the crash occurred in July 1991. The wagon was stopped or moving slowly near a toll gate between Norfolk and Virginia Beach when its gasoline tank was ruptured by the tongue of a 1,300-pound homemade trailer that had broken loose from its tow vehicle driven by Curtis Cayton.

Shane McGee, 13, died in the accident, along with another passenger. His family contended that the wagon’s gas tank design was defective, and that the automaker knew of the problem and could have corrected it, but did not do so in order to save money.

‘Plaintiffs’ allegations that GM’s design process considers profits over safety could not be further from the truth,’ GM spokeswoman Mary Henige said in a statement. ‘The testing and real-world performance of this fuel system clearly show the design to be safe. … GM believes the jury was obscured in their analysis by improper evidentiary rulings throughout the trial.’

William Kirk, an attorney for GM, said because of the way the 29-inch trailer tongue hit the tank dead-on with heavy force, no design could have survived the impact.

Attorneys for the McGees presented evidence that the fuel tank should have been made of thicker steel or protected with a liner, plastic shield or internal bladder. Expert witnesses also testified that the wagon did not have enough ground clearance for safe operation.

Robert Kelley, one of the McGees’ attorneys, contended GM tried to hide documents showing engineers and lawyers knew the tanks could burst into flames after collisions.

The documents were eventually obtained and released to the public by Judge Franza in February. Among them was a study by GM engineer Edward Ivey that placed a $200,000 ‘value’ on each fatality that involved fuel-tank-related fires. It estimated that with 41 million vehicles then on the road, the fatalities cost GM $2.40 per automobile. The study said it would cost $2.20 per new model to prevent fuel-fed accident fires, assuming such crashes could be prevented beginning in a certain model year.

GM alleged during the trial that the Ivey study was never used.

Other documents made public in February included the 1981 notes of a GM attorney’s interview with Ivey. Safety advocates say the documents bolster their contention that General Motors knew about vehicle fuel tank problems, but did nothing to fix them.