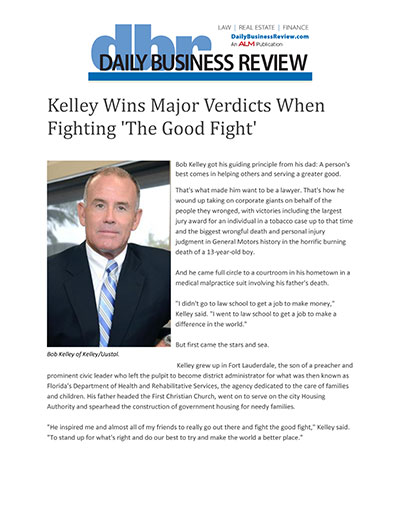 Bob Kelley got his guiding principle from his dad: A person’s best comes in helping others and serving a greater good.

That’s what made him want to be a lawyer. That’s how he wound up taking on corporate giants on behalf of the people they wronged, with victories including the largest jury award for an individual in a tobacco case up to that time and the biggest wrongful death and personal injury judgment in General Motors history in the horrific burning death of a 13-year-old boy.

And he came full circle to a courtroom in his hometown in a medical malpractice suit involving his father’s death.

But first came the stars and sea.

Kelley grew up in Fort Lauderdale, the son of a preacher and prominent civic leader who left the pulpit to become district administrator for what was then known as Florida’s Department of Health and Rehabilitative Services, the agency dedicated to the care of families and children. His father headed the First Christian Church, went on to serve on the city Housing Authority and spearhead the construction of government housing for needy families.

“He inspired me and almost all of my friends to really go out there and fight the good fight,” Kelley said.”To stand up for what’s right and do our best to try and make the world a better place.”

With that in mind, he headed to Vanderbilt University thinking of becoming an investigative journalist.Two years later, he said an astronomy professor “really opened my eyes to the power and the mystery of the physical universe.”

He changed majors and “spent the next two years studying physics and chemistry and mathematics and astronomy, just trying to figure out everything I could about, I guess, our place in the universe.”

When Kelley graduated, though, he turned his sights to the sea. He spent a couple of years working aboard commercial fishing boats, chasing marlin, swordfish and tuna.

“I love the water. I love the ocean. I love the reefs. So it was something to do for a while. I realized I was going to do something with my life other than fish,” he said. “But there comes a point in time where you have to take time for yourself.”

Years later, his love of the water inspired him to found the DiveBar, the first underwater bar association,bringing together scuba-diving lawyers and judges for fun, philanthropy and preservation.

His pursuit of the law started at Nova Southeastern University, right at home.

“I had a general sense that I would be a lawyer in court and that I would be on the side of the average guy,” he said. “I knew that. But when I started law school I didn’t even know what a tort was.”

Kelley excelled. He made editor-in-chief of the law review and graduated at the top of his class.

He landed an internship at the Broward state attorney’s office, “so I could get some trial experience.”But his real goal was plaintiff’s work. When he got his law degree, though, that was nowhere to be found. He wound up doing insurance defense work instead for two years. “I hated it. But I learned a lot.”

That’s how he met Sheldon Schlesinger, known as the dean of personal injury attorneys in the area.Schlesinger hired him, and they stayed together for more than 20 years.

Kelley handled cases from one end of the country to the other for the firm, but one of the most significant of his career came at home. It involved a 13-year-old boy who burned to death after his parents’ Oldsmobile Cutlass station wagon burst into flames. The $60 million jury verdict in 1998 was the largest wrongful death and personal injury judgment ever paid by GM.

More important to Kelley was the impact. He exposed General Motors’ cover-up of a “value analysis” by its engineers and a decision to save $2.20 per vehicle by not installing fuel tank shields that might have saved Shane McGee’s life. The case and the cover-up got national attention, including a segment on CBS’s “60 Minutes.”

In 2006, he teamed up with John Uustal to form their own firm, Kelley/Uustal. It quickly shot to national prominence when Kelley won a whopping $300 million jury verdict against cigarette maker Phillip Morris.

Since then, the firm has grown to 21 attorneys. They’ve taken on builders and boaters, police and prescription drug makers, doctors and hospitals, and won millions of dollars in verdicts and settlements for their clients.

One, though, was personal.

In 2008, Kelley’s father got knee surgery at Broward General Medical Center but never got blood thinners to prevent clotting. He died five days later from a pulmonary embolism caused by blood clots from his leg.

Kelley sued. It took five years, but in a result reminiscent of the GM fuel tank case, the judge ruled hospital officials concealed evidence and that the public North Broward Hospital District “provided intentionally misleading testimony” in the case.

The hospital settled for an undisclosed amount.