More Than A Dozen Lawsuits Filed Against FBI Over Parkland Shooting 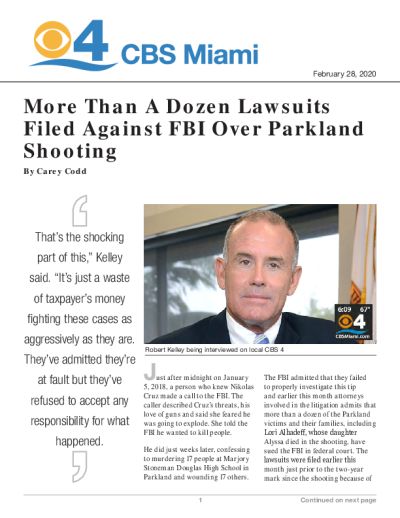 Just after midnight on January 5, 2018, a person who knew Nikolas Cruz made a call to the FBI. The caller described Cruz’s threats, his love of guns and said she feared he was going to explode. She told the FBI he wanted to kill people.

He did just weeks later, confessing to murdering 17 people at Marjory Stoneman Douglas High School in Parkland and wounding 17 others.

The FBI admitted that they failed to properly investigate this tip and earlier this month attorneys involved in the litigation admits that more than a dozen of the Parkland victims and their families, including Lori Alhadeff, whose daughter Alyssa died in the shooting, have sued the FBI in federal court. The lawsuits were filed earlier this month just prior to the two-year mark since the shooting because of a statute of limitations issue.

“My daughter died because (the FBI) didn’t do anything about it,” Alhadeff told CBS 4 News. “Their protocols failed and they should be held accountable.”

The tip from January 2018 – just 6 weeks before the shooting – was detailed. The caller told the FBI that Cruz stockpiled weapons, hurt animals, led them to his social pages and even provided the address and phone number of where Cruz was living. But, according to Alhadeff’s lawsuit filed in the Southern District of Florida, the FBI call taker ‘consulted with her supervisor and the matter was closed’ without any further action.”

Alhadeff’s lawyer, Robert Kelley, wants to know why the FBI did not investigate the tip.

“For the past year, they’ve been fighting tooth and nail to keep us from getting that information,” Kelley said. “We will find out.”

The FBI apologized publicly days after the tragedy and apologized privately to the victim’s families.

“The FBI has determined that protocol was not followed,” then-Special Agent in Charge of the Miami Field Division Robert Lasky said after the Parkland shooting. “We truly regret any additional pain that this has caused.”

The FBI also received a tip prior to the shooting about a comment made by a person named Nikolas Cruz on YouTube saying he was going to be a “professional school shooter.” That tip also went nowhere.

CBS 4 News reached out to the FBI on Friday but they declined to comment on pending litigation. The FBI says they have made changes to its handling of calls like this one. They told the MSD Commission, which investigated the shooting that they added staff, increased training and put a greater scrutiny and emphasis on calls regarding threats.

There are two ongoing lawsuits by Parkland victims against the FBI. In those cases the FBI is fighting the allegations and asked a judge to dismiss them saying “The United States is not legally responsible for the actions of Nikolas Cruz.”

Alhadeff believes they are.

“As the FBI, as the United States of America, they had an obligation to make sure that these tips that they thoroughly vetted through these tips and that they did their job and they didn’t do their job,” she said.

Kelley says with the FBI’s apology and admission of mistakes, he’s surprised they’re challenging the cases in court.

“That’s the shocking part of this,” Kelley said. “It’s just a waste of taxpayer’s money fighting these cases as aggressively as they are. They’ve admitted they’re at fault but they’ve refused to accept any responsibility for what happened.”

Alhadeff wants the FBI to own up to its mistakes.

“We say see something, say something,” she said. “People said something and the FBI did nothing.”