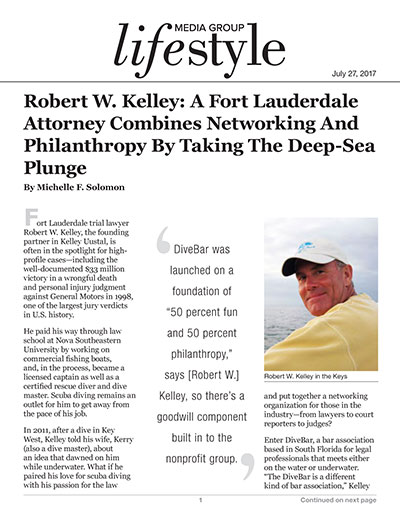 Fort Lauderdale trial lawyer Robert W. Kelley, the founding partner in Kelley Uustal, is often in the spotlight for high-profile cases–including the well-documented $33 million victory in a wrongful death and personal injury judgment against General Motors in 1998, one of the largest jury verdicts in U.S. history.

He paid his way through law school at Nova Southeastern University by working on commercial fishing boats, and, in the process, became a licensed captain as well as a certified rescue diver and dive master. Scuba diving remains an outlet for him to get away from the pace of his job.

In 2011, after a dive in Key West, Kelley told his wife, Kerry (also a dive master), about an idea that dawned on him while underwater. What if he paired his love for scuba diving with his passion for the law and put together a networking organization for those in the industry–from lawyers to court reporters to judges?

Enter DiveBar, a bar association based in South Florida for legal professionals that meets either on the water or underwater. “The DiveBar is a different kind of bar association,” Kelley says, “because it brings people together who have a passion for the water, and it affords an opportunity for people in the legal field to get to know each other on another level.”

Members pay yearly dues (about $150; less for law students). “Whether someone is an experienced diver or has an interest, they are welcome to join,” he says. “We have programs where we can get a new member certified, or for those who are already certified, and want to get advanced certifications, we can do that, too.”

DiveBar (thedivebar.org) grew from 25 members to about 225 members as of this year. Student DiveBar associations are cropping up, too, at the University of Miami Law School and at Florida International University.

DiveBar also sponsored a nursery tank at the school for researchers to study and grow coral. Coral fragments from the tank created what’s now known as the DiveBar Reef. In 2014, through a series of three dives, members attached the corals to the rocky floor off northern Fort Lauderdale, where it continues to grow in the hopes of attracting fish and other marine life. DiveBar also supports the Diveheart Foundation, which teaches scuba diving to the disabled.

Special dive events cost extra, such as an upcoming Fort Lauderdale City Lights Night Dive on Aug. 26. It starts with a twilight dive on Hog Heaven, a 180-foot barge that is a perennial South Florida wreck dive favorite, followed by dinner on the boat under the stars. “Most people think that night dives are scary, but it’s one of the most beautiful and peaceful places you will ever go,” he says.

In September, the group goes in search of Jupiter Goliaths, 8-foot-long, 800-pound groupers that congregate off the Southwest Florida coast, about 100 feet below the water’s surface. “We went to Belize a couple of summers ago, and we were diving with 50-foot-long whale sharks,” he says. “We’ve had some spectacular dives.”

Kelley is prepared for cracks about the DiveBar–as in the age-old comparison of lawyers to sharks. He rattles off a classic joke: “Why don’t sharks attack lawyers? Professional courtesy.”