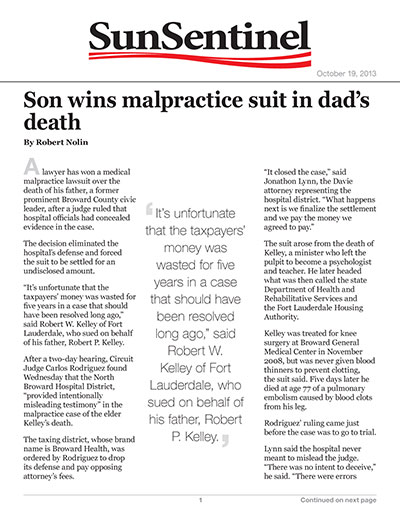 A lawyer has won a medical malpractice lawsuit over the death of his father, a former prominent Broward County civic leader, after a judge ruled that hospital officials had concealed evidence in the case.

The decision eliminated the hospital’s defense and forced the suit to be settled for an undisclosed amount.

“It’s unfortunate that the taxpayers’ money was wasted for five years in a case that should have been resolved long ago,” said Robert W. Kelley of Fort Lauderdale, who sued on behalf of his father, Robert P. Kelley.

The taxing district, whose brand name is Broward Health, was ordered by Rodriguez to drop its defense and pay opposing attorney’s fees.

“It closed the case,” said Jonathon Lynn, the Davie attorney representing the hospital district. “What happens next is we finalize the settlement and we pay the money we agreed to pay.”

The suit arose from the death of Kelley, a minister who left the pulpit to become a psychologist and teacher. He later headed what was then called the state Department of Health and Rehabilitative Services and the Fort Lauderdale Housing Authority.

Kelley was treated for knee surgery at Broward General Medical Center in November 2008, but was never given blood thinners to prevent clotting, the suit said. Five days later he died at age 77 of a pulmonary embolism caused by blood clots from his leg.

Rodriguez’ ruling came just before the case was to go to trial.

Lynn said the hospital never meant to mislead the judge. “There was no intent to deceive,” he said. “There were errors made, but they were innocent mistakes.”