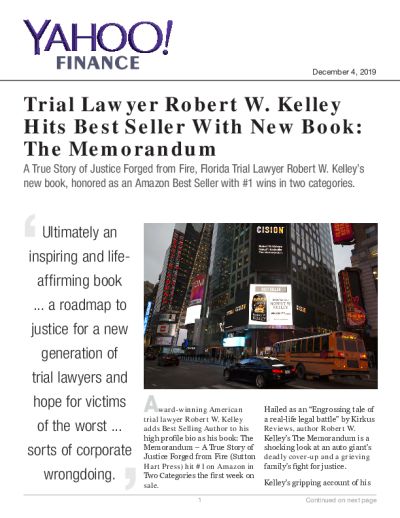 Hailed as an “Engrossing tale of a real-life legal battle” by Kirkus Reviews, author Robert W. Kelley’s The Memorandum is a shocking look at an auto giant’s deadly cover-up and a grieving family’s fight for justice.

Kelley’s gripping account of his epic legal battle against one of the world’s most powerful companies chronicles his against-all-odds victory with justice for a family forever devastated by its misconduct.

A true story so thrilling it could be fiction in the style of another bestselling legal author, John Grisham, The Memorandum brings to life one of the most important cases of the decade. A giant corporation, a secret memo exposing its reprehensible actions, legions of defense lawyers blocking the truth, and a relentless band of warriors delivering a monumental courtroom victory.

Ultimately an inspiring and life-affirming book offering a roadmap to justice for a new generation of trial lawyers and hope for victims of the worst, and too common, sorts of corporate wrongdoing.

A riveting narrative by one of the year’s breakout legal authors – Robert W. Kelley.