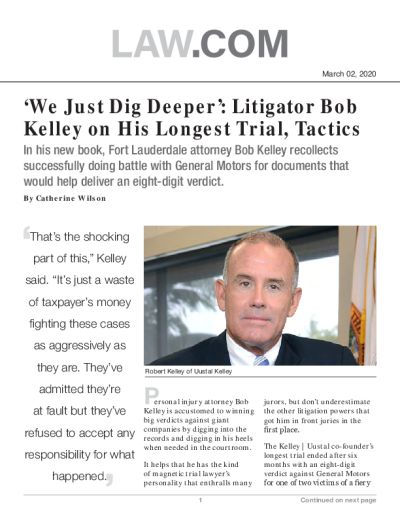 Personal injuryattorney Bob Kelley is accustomed to winning big verdicts against giant companies by digging into the records and digging in his heels when needed in the courtroom.

It helps that he has the kind of magnetic trial lawyer’s personality that enthralls many jurors, but don’t underestimate the other litigation powers that got him in front of juries in the first place.

The Kelley | Uustal co-founder’s longest trial ended after six months with an eight-digit verdict against General Motors for one of two victims of a fiery crash. After repeated attempts through the years, he finished writing a book titled “The Memorandum” about the case.

Kelley and partner John Uustal uncovered and assembled corporate records that GM tried for years to keep out of the nation’s courtrooms to avoid showing it knew how lethal some of its gas tanks could be but treated the resulting deaths and injuries as a secret cost of doing business – $4.50 per vehicle for a tank shield. A long-hidden internal report is the source of the book’s title.

Written with former TV journalist Carlos Harrison, the book subtitled “A True Story of Justice Forged from Fire” details corporate misconduct uncovered while Kelley represented two school teachers whose 13-year-old son was burned on every body part but his soles when he was the last to get out of a 1983 Oldsmobile Cutlass Cruiser station wagon.

A homemade trailer came unhitched from another car slowing at a Virginia tollbooth and slid with “a little bump” or a “thud” into the wagon, piercing its gasoline tank and instantly setting off an inferno that claimed the lives of Matt Murphy and Nancy Harris within days.

All of the discovery was done in the pre-Internet age of paper trails that stretched to Detroit and Los Angeles. One hunch led to another about what GM knew.

The Broward Circuit Court verdict reached in 1999 was affirmed on appeal in 2003. With interest, GM paid $90 million, a company record in a post-collision fuel-fed fire case. It was the subject of a “60 Minutes” segment that portrayed the company’s prolonged history of hiding incriminating internal reports.

The book is part tactical guide to high-stakes litigation and part memoir written in quick, breezy sentences. Kelley tells why he doesn’t mind being underestimated by the opposing side and explains the personal costs that can drop into any lawyer’s life.

Kelley said a lot of legal detail was left out of the book to keep the story on track. If you’re intrigued, you can find the Sutton Hart Press book on Amazon and elsewhere.

He offers more observations on his 38-year legal career and his Fort Lauderdale firm, which handles wrongful death and catastrophic injury cases.

Vehicle safety: “This case is one of the cases that resulted in safer fuel tanks in cars.”

Plaintiff litigation: “It’s been an important part of our justice system for many years, and I hope that it’s able to survive going forward.”

Changes in litigation: “The longer you practice law, at least in my area, the more cynical you become of the corporations that you’re litigating against, and you just learn that they are not going to be forthcoming and honest in court, and so we just dig deeper and deeper into these cases every year.”

Jury selection: “I have known for certain the past 15 or 20 years of my career that the most important part of the trial is the jury selection process. It takes a while to learn that as a lawyer. …It means that we have a high degree of certainty on how a trial will come out when the jury selection is over.”

Work pace: “I’m always handling just very few cases.” He focused on five to 10 cases at a time for the last five years. The firm recently filed eight tobacco cases in Las Vegas. “We’re cranking it up out there.”

Succession planning at his 16-attorney firm: “Oh no, we haven’t started that yet. I’m not old, but I do have a lot of young lawyers here who are chomping at the bit to get into the courtroom.”

His future: “I actually am going to start working on another book.”